It’s a big week in family eKuiLibriuM’s life – a new normal is starting to fall into place.  We’ve had a rumbling couple of months with possibly some of the most challenging events occurring, some simultaneously.  At times I have personally felt like I have been walking around in a fog; some days of complete clarity too and I know that Larry has found it hard at times, as has our 13 year old daughter.  I am pretty sure that Bella the dog has intuitively known when we have needed an extra cuddle, or little dog walk aswell.

Monday 16th February – I will remember the conversation with a friend well about loss and grief surrounding losing a loved one, as someone we knew had died that weekend and we were saddened for the families’ loss.  In hindsight, I stupidly made the comment that I thought I was at a point, that should my brother pass away, that it would be something that I would be able to cope with as we had been at the ‘saying goodbye point’ many times in the last 2 years.  I wish I could take those words back now…

Jeff was 43 – my only brother, only sibling.  We grew up in the 70’s and 80’s in a typical working class family.  We played quite happily most of the time, on our bikes tearing around the streets, or we had our ‘action men’ and ‘sindy’ dolls out and occasionally we would bark and squawk at each other.  He had it easier at home being the youngest – I had most of the chores and expectations and as a girl the most restrictions.  He had the freedom of being a boy!  But hey we did laugh lots.

Our mum had Multiple Sclerosis – but when we were growing up, none of us knew that.  She was just not well for a lot of the time – sometimes fine, others it was just not possible for her to function normally, but she kept on keeping on.  She was also sadly diagnosed with breast cancer in 1984, with an aggressive lumpectomy, chemo and radio to follow and she survived.  And so we got on with getting on.  It took until 1993, when she was 53, to finally be told what was wrong with her as modern advancements in healthcare were leaping ahead.  Just a short 4 years later our world would be turned upside down again as Jeff was told he too had Multiple Sclerosis.  Their versions of the disease were very different and our Mum sadly died in 2000 from her only bout of pneumonia.  She had fought for long enough.  Jeff survived and fought through brochial and aspiration pneumonia more times from 2007 to his death in February too many times.  I lost count.  Each bout would weaken his body, but not his desire to survive and do more than survive, he lived.

I could write about Jeff on an ongoing basis and I am sure that I will revisit our life at times in written word but today I felt the desire to write about how I have managed this ‘stuff’ in my life.  Bereavement.  Loss.  Being a carer.  Without the unwavering love and support of Larry and our daughter I do not think that I would be the person that I am today.

I am not completely sure how I became essentially Jeff’s main pillar of support.  It’s not a role I put on my bucket list as a need to fufill.  On that list are numerous things that seem a little unrealistic, some bonkers and others achievable.  One of the bonkers, unrealistic and achievable was training for and completing my ironman triathlon finally in 2014.  Jeff saw this on the tv.  Double whammy bucket list of pride for me!  But I embraced supporting Jeff.  He was single and as he lost his physical voice I made sure I rattled more cages so that he was treated with respect and humanity to the very end.  The last 15 or so years of his life saw him lose a lot of dignity but by allowing this to happen he gained the freedom to live.  I will be forever happy in the knowledge that I did what I could for him supported by my wonderful hubby, who treated Jeff like his own brother.  We were a team and Jeff’s death has left a void in our lives that will never be able to be filled irrespective of whether that was creating a fun memory with him, or fighting his corner.

On several occasions since 17th February I have wanted to facetime him on the ipad to tell him about something that we have done and I have had to stop and remind myself that I cannot do that any longer.  I have also felt a sense of complete uselessness at times , particularly once all the formalities, legalities and sendoffs were finalised.  There’s not been much else that I could do to ‘help’ Jeff, or assist him, which has been an aspect of my daily life for a very long while.  On one level I miss being needed, but on the other end of the see-saw I feel absolute relief of not being needed.  I had a fleeting moment of guilt associated with feeling relief and then reminded myself that this was quite normal.

On Sunday, after a weeks’ family holiday with our good friends in Cornwall, I returned far more focussed and relaxed and looking forward to creating the new normal that had been evolving.  One part of this process was that I looked into ‘bereavement’ and what it is and what I could expect to have experienced , or possibly still experience and I found a site on the web (as you do these days eh!) and was shocked, and calmed at the same time, to find that all the ‘symptoms’ I have experienced are truly linked to loss.  I had kind of hidden myself away from the world a little bit aswell for a few weeks.  I had emerged to do some bits of fitness that I wanted to do as I needed the escape.  I had cried when I needed to or wanted to, and sometimes when I least expected to.  I had eaten mindlessly, or not at all.  Some meals I have no recognition of creating for us as a family, but we seem to have eaten ‘ok’ for the last couple of months.  But I have drunk too much alcohol to dull the senses, or lighten my mood.  I have eaten too many sweet things to lift my spirits – but the bounce down from both these have been horrid at times.  So Monday was my day to say, enough is enough – let’s start my new normal.

I am very lucky.  Along with Larry and our kid I do also have a wonderfully  supportive network of personal friends, evolved through various aspects of life including home, sport and our own family business.  They have included, encouraged and nurtured me where I have needed it, and left me to my own devices when they know that’s what I have needed.  They have listened to me talk and talk and talk – sometimes not making any sense.  But as I grew up with parents who had no idea how to talk about problems, or share problems to find solutions, or at least work through them (my Dad sadly still doesn’t know this and he is almost 76), I knew talking was important.  I wrote words for facebook – possibly the fakest environment for bereavement and grief, but it connected me with everyone else who knew Jeff that was feeling a version of this pain.  That helped.

So Monday, 20th April came and it has gone.  My new normal hasn’t started quite as smoothly as I hoped, as other family things have occurred to kick us all a little in the teeth.  But I have drawn a big breath.  Walked away from booze and sugary excesses, added more structured times back in and all the other sad baggage that is surrounding us, I am sure will work itself out.  It would be great to wake up every now and then tho and know that I only had to worry about a nasty spot on my chin.  I am sure that this will be my biggest dilemma at some point.  Or the spot on my teenage daughters chin.  Then other days there will be another of Life’s curve balls to catch.  But in the meantime, I am grateful to see the blue skies every day, even if they are hidden behind grey clouds.  I have immense gratitude to be loved by my people and privileged to be able to love them back and offer support and friendship to others.

The miracle of life is a short one.  Fuzzy at times, paths can be scattered or blocked.  Occasionally we don’t feel like we have the easy options, but life is to be embraced and celebrated as much as possible and being part of my brother’s life has taught me that anything and everything is possible. 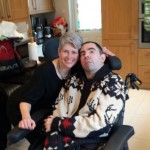 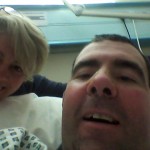